If there was ever a doubt how good of talent evaluators the Illini staff are, look no further than 5 foot 11-200 pound safety Bennett Williams from Mountain View (St.Francis) California. An All State & All district selection his senior season playing High school football in California. He Had no power five offers heading into December of last season. San Jose State would of been lucky to have him honestly, most recruiting services had Bennett at two stars.

Illinois offered Bennett a month before signing day, after 64 tackles and 3 interceptions during his first season in Champaign a lot of other power five schools are wondering how they missed such a talent. I spoke to Bennett and his father about his first season at Illinois and the recruiting process.

One on one with Dad

Garey Williams played college football at Cal With Illinois defensive coordinator and long time NFL middle linebacker Hardy Nickerson. It is safe to say he knows the game well and at a high level. That’s the connection on how Illinois landed Bennett but the process of how Hardy first saw His tapes is one you won’t forget.

Hardy and Garey were Friends on Facebook and from time to time Garey would send highlights to his parents for them to watch. This must be noted that garey told me Bennett gets all his talent from his grandmother (Garey’s mother) even though I see physically he gets a lot from his dad, I don’t doubt him one bit though. Hardy saw these come across his Facebook and began to be intrigued by his film. Bennett always making the plays and being in the right place at the right time. That’s where Bennett gets his nickname Ballhawk, has good hands and he ends up being where the ball is going.

After weeks of seeing highlights across Facebook Hardy contacted Garey about his son and watched his HUDL. Hardy made some phone calls and Illinois offered. Film doesn’t do Williams justice, he isn’t the fastest player out on the field but he’s fast enough to make the right reads and get to where he needs too. He’s a winner and a fierce competitor, Hardy likes that a lot. I asked Garey why other power schools never pulled the trigger and offered Bennett, obviously a big mistake in my eyes.

“In this day and age of video recruitment, I can only guess that Bennett’s video didn’t show explosive speed. Though he proved over and over again that he was fast enough to repeatedly make the big play. Bennett truly has a nose for the football. Instincts that can’t be coached. May not really impress in a testing setting Not great physical measurables, but great athletic ability to be at the right place at the right time. Great feel for the game. Ball skills. Productivity. Tremendous breaks on the ball. The kind of guy I’d want on MY team!”

I asked Garey what it was like to have his former teammate coaching his son and seeing his son play on the biggest level possible in college.

“As cool as it is having an ex-teammate coach my son, I’m careful to not intervene nor expect any special treatment. That said, I am elated that Hardy is his coach! He’s knowledgeable about football and he’s an upstanding guy. Hardy’s demeanor fits Bennett perfectly. The negative reinforcement, in-your-face type of coach probably wouldn’t fair too well.”

Most importantly Garey is happy his son is a better man than he is a football player. And he’s a darn good football player. I can tell Garey has done a great job alongside his wife raising his two sons. His other son Evan just won a state championship this past weekend and made the game winning catch. I’ll be keeping my eye open for him as well. I spoke with Bennett about his first year at Illinois and playing football at the highest collegiate level and even the weather difference between California and Central Illinois. 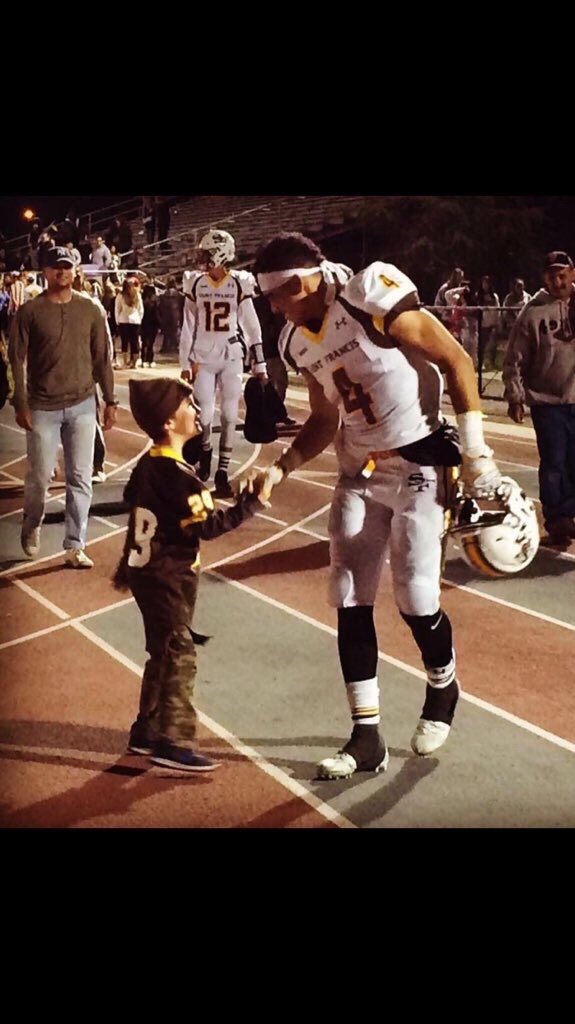 Catching up with Bennett

Bennett Williams was Illinois first Safety to start as a true freshman since 1980. That’s saying a lot especially with as many quality secondary players the program has had in that 37 year stretch. I told him that and he was extremely appreciative and grateful.

“That was really cool. It was something I put my mind to when I signed, starting some point in the season. I didn’t know it would come that early! It was the only game where I was nervous but after a few plays, I realized I belonged and the game felt like the same as it has been at every other level.

Playing under great football minds is something every player wants. It’s not everyday a college player gets 56 years of NFL coaching experience to help mold and teach. I asked what it was like playing Big Ten football and having Lovie Smith and Hardy Nickerson in particular to learn from.

“Playing under such widely respected and knowledgeable coaches like Coach Smith and Nickerson is really a huge blessing. Being able to learn from coaches that have so much experience in the NFL gives me tips and keys that most don’t get, especially not as a freshman. I get to pick their brains, and the more I’m in the film room with them the more I understand. I’m confident that we got a solid foundation in our 2017 recruiting class and with this staff. They know how to evaluate talent – period. We are going to have the players that can get it done and that trust in the process. I have no doubt this next season is going to surprise a lot of people.

I asked Bennett why he felt he didn’t get recruited harder by many of the West coast power five teams and how recruiting is targeted with stars.

“Recruiters are lazy. Coaches are lazy. There’s too many kids to evaluate in their eyes. Based off of a 40 time on a sheet of paper or sheer size or just hype, guys can get 4 or 5 star ranks and will get all types of offers. Then you see them go to the next level and have little or no impact. Guys like me, Nate Hobbs, Tony Adams, Lou Dorsey, Isaiah Gay, Bobby Roundtree, etc. were all guys who were 3 stars or less, little to no power 5 offers, and come in and have an immediate impact. I know personally I was a two star on almost all the recruiting services. No Power 5 college wanted to be the first to pull the trigger. Most coaches don’t evaluate players in depth and see how they play the game of football. These coaches here at Illinois do a fantastic job of evaluating in depth and handpicking talent and potential among guys that have been slept on. The success that us type of players have had goes to show how none of that stars really matters. It’s about whether or not a guy can play football.”

My final questions were about adjusting to Illinois weather and how being named an Freshman All-American feels.

“The All American distinction is pretty cool. To me, it’s something I wanted to accomplish since day 1. Watching the hard work pay off for me is rewarding. I think it just motivates me to work harder and exceed expectations next season. It’s been real cold lately, and I know the worst hasn’t even started yet. I’m definitely going to enjoy this month back home, and probably going to have to buy a few more heavy coats. I actually love snowboarding so I’ll be doing that over break, but living in the snow is a whole different story than visiting for a few days.” 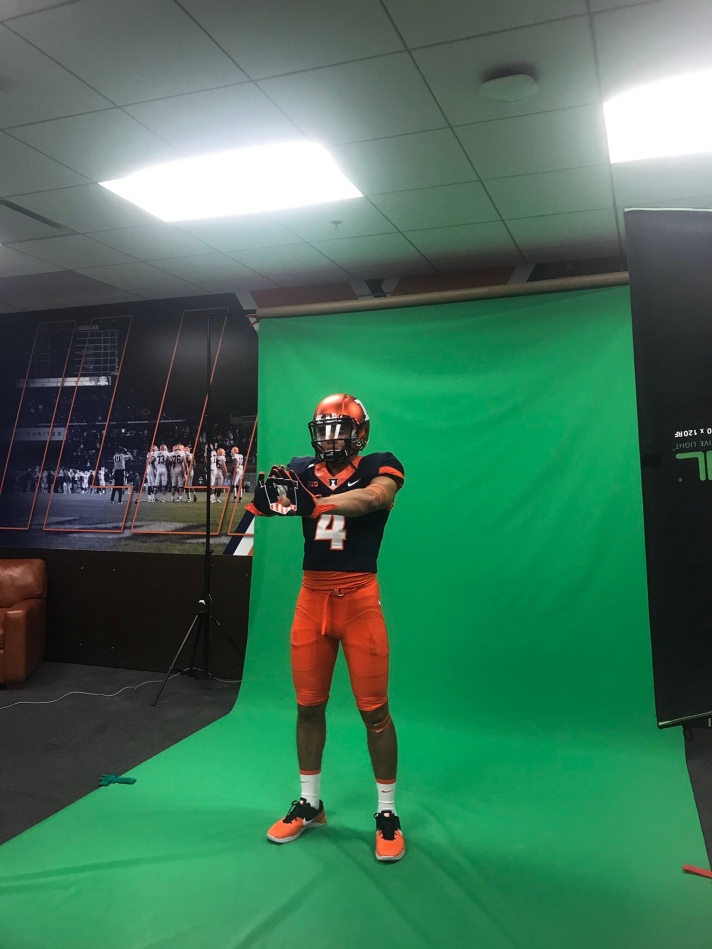 Bennett is a humble and hard working guy who was under appreciated on the football field. He’s proof no star or big time offer list defines what kind of player you will be in college. Illinois got an All-American Safety, more importantly and All-American human being

Sports has always been a huge part of my life. I Have gotten to cover and report illini news since 2015. Growing up in central Illinois, the illini are front and center. I want to provide quality Illinois recruiting and team info as soon as possible. I have built relationships and contact sources to bring the latest accurate news. Thanks for caring and following this and my twitter @illscoopsRyan View all posts by Ryan Evan