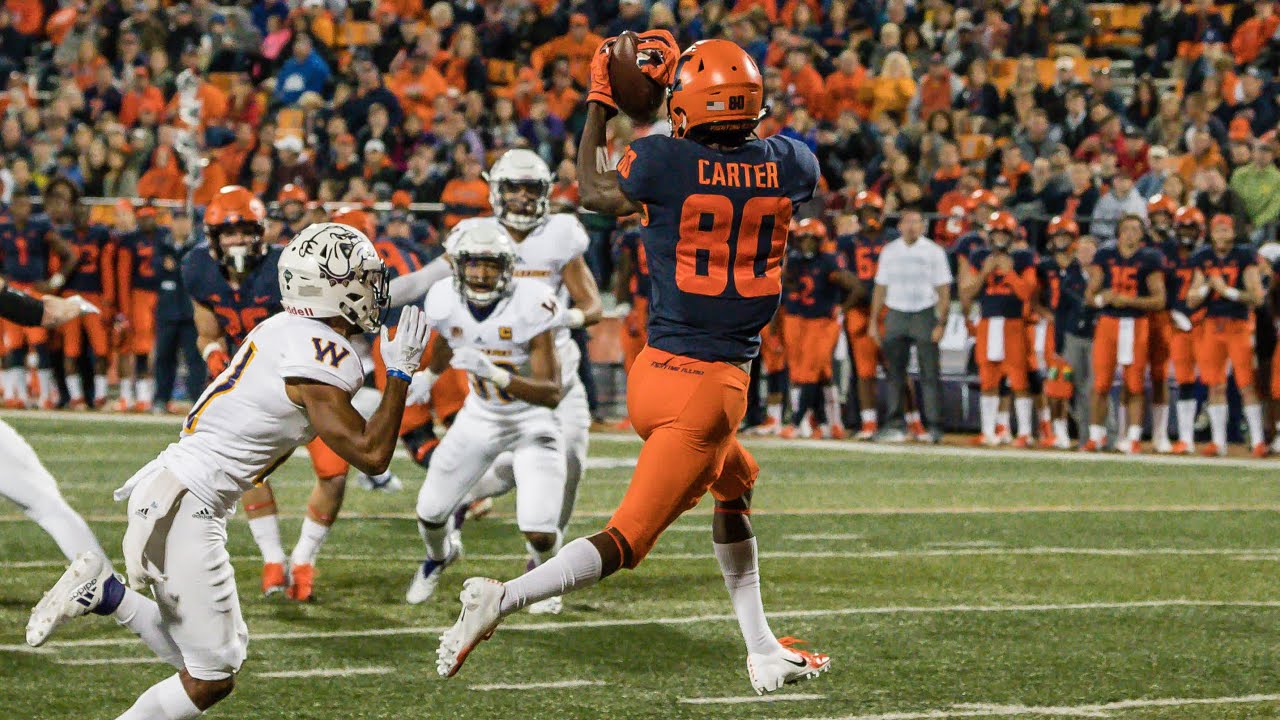 This past College Football season for the Illinois Football program was all about growth. The team started many freshman at skill positions and the hope was that stars would emerge through the struggle. Although red-shirt freshman wide receiver Edwin Carter only played in one game last year, I think it is fair to say that he made a strong impression on many, in the Illini fan base. On only two receptions, Carter had 34 receiving yards and 2 receiving TDs. As a true freshman, Carter was able to make an immediate impact when called upon by HC Lovie Smith and OC Rod Smith. This is what made his injury that more devastating. The Illini were already dealing with depth issues at the wide receiver position and losing an emerging star at that position was a major blow to the team.

Carter confirmed to Ryan Evan, publisher and head reporter for IlliniScoops, that his injury was a torn anterior cruciate ligament (ACL), lateral collateral ligament (LCL), hamstring, and a disconnected IT band. Even to the average fan, it is easy to see why many were speculating that Carter’s injury could be career ending. Carter’s road to recovery began with two surgeries of which the first required him to be on crutches for about 7 weeks. Here, physical therapists and rehab aides worked on helping Carter walk again. Once he was able to walk again, Carter had his second surgery; which wasn’t as serious and Carter was back to walking within 10 days. Carter’s doctors’ have liked the way he has progressed and it seems as though Carter has been in great spirits since then stating “I’ve been in high spirits seeing the progress in my recovery and knowing that I’m capable of helping my team a lot next year.” In my opinion, I believe is it difficult to make a recovery physically from an injury however, making a recovery mentally might be even more difficult. As someone who has torn an ACL, MCL, and meniscus in the same knee, I can tell you that what Carter is trying to accomplish is no easy feat.

Fast forward a month or so, and I spoke to Carter again, in which he stated “It’s an ongoing process. I’m going to hit my top straight line speed soon. I’ve started jumping and doing footwork. I’ll start being able to make cuts in the middle of May and I hope to be back to 100% in June.” Simply put, this is remarkable news. Carter’s progress has been unfathomable and to think that he just might be able to be a part of the 2019 wide-receiver corps is huge news. He is the type of player that plays for his team and will do anything to get his team the win. When Ryan Evan asked Carter about his injury and whether he had known something was seriously wrong at the time of the injury, Carter said “I didn’t know the injury was that severe at all. I was just really focused on scoring.” Everything about this statement suggests that Carter has the mentality of being Illinois’ next great star.

I truly believe Carter will have a significant impact for the Illini if he does indeed suit up during the 2019 College Football season. His 6-3 , 180 pound frame allows him to compete for 50/50 balls against most defensive backs in college football. Carter also possesses hands that I believe are as good as any other wide receiver in the Big Ten Conference. Carter could struggle with playing time to do a number of factors. Firstly, the wide receiver corps has improved immensely thanks to the addition of 4 Star wide receiver and former USC commit Trevon Sidney and the emergence of junior wide receiver Kendall Smith and sophomore transfer wide receiver Donny Navarro. Secondly, it is difficult to project what kind of impact Carter will make right from the get go considering the severity of his injury. If he can perfect his route running and regain some of his 2nd gear speed, he can be a great asset for whoever the starting quarter-back ends up being. It is clear that Edwin Carter will be a fan favorite for years to come. He is a humble and hard working kid on and off the field and he wants to be able to make an impact in 2019, stating “I wasn’t working twice as hard to come back in 2020.”