Graduate transfer TJ Holyfield completed his visit to Champaign, Illinois on Saturday May 5 and has now taken all of his three official visits. TJ Holyfield has been one of the highly sought after transfers this off-season because of his impact at the Stephan F. Austin Lumberjacks. During the 2017-2018 season, Holyfield shot 54.8 percent from the field, 41.2 percent from 3-point land, and 75% from the free throw line while averaging 12.9 points. 6.4 rebounds and 1.3 blocks. This is production that this team needs badly.

TJ Holyfield will be a major contributor to whichever program he picks from day one because of his versatility on the court. In his time at Stephan F. Austin, Holyfield became the all-time leader in blocked shots while playing multiple positions. Holyfield is officially listed as a 6-foot-8, 227 pound power forward. Although this is his natural position, he has the skill-set to play the small forward position. This would allow coaches to show their creativity and create all sorts of match up issues against opposing teams. Holyfield missed the 2018-2019 season due to a shoulder injury but it doesn’t look like that is slowing him down.

Texas Tech is on the rise. Not only did the Red Raiders win the Big 12 Conference outright, they also reached the NCAA Championship game against the eventual champion, the Virginia Cavaliers. Texas Tech Head Coach Chris Beard has done a fantastic job developing players that were not highly touted recruits out of high school. I bet this will be an enormous factor when it is time for TJ Holyfield to come to a decision. In fact, I bet Beard tried to sell Holyfield on the idea of developing him into a first round NBA talent just like he did with Jarrett Culver. Culver came to Texas Tech as a three-star recruit and developed into a player that most NBA Draft experts believe will be a top ten pick in this year’s draft. Beard has also shown that he can bring in graduate transfers such as Matt Mooney and Tariq Owens and make them successful in his system. Additionally, another factor in Holyfield’s decision could be playing close to his family in his final year. Holyfield is from Albuquerque, New Mexico which makes Texas Tech his closest option to home and might swing his commitment to the Red Raiders. Finally, Texas Tech provides ample opportunity for Holyfield to play immediately, which is another positive selling point for Chris Beard and Texas Tech.

Former Illinois Head Coach Bill Self is still at Kansas but his latest year at the helm of the Jayhawks was a struggle particularly in the front-court. It is safe to assume that Self will replace the key losses of Dedric Lawson (NBA Draft), Silvio De Sousa, and Udoka Azubuike with equally talented individuals, but will TJ Holyfield be that guy? If he is, he will be a dynamic player for Bill Self.

There are a few factors about Kansas that I think will influence Holyfield’s decision. First of all, there is a lot of uncertainty surrounding the Kansas Basketball program. Kansas, among other programs around the country, has been subject to the FBI probe and NCAA investigation relating to paying players who are currently on the roster. It’s my 2.0 that Holyfield would not want to be a part of that. As an extension of this, Bill Self has suggested that the Kansas Jayhawks have been subject to negative recruiting which is another hit to the Kansas Jayhawks securing Holyfield’s commitment. Despite the negativity, it was reported that Self was able to make a strong impression on Holyfield and the Kansas faithful believe he could be heading there.

The Illini have made it a priority to address the issues they had last year in the front-court with the additions of four-star center Kofi Cockburn and three-star forward Kouma Bernard. While these additions are fantastic and will greatly improve the team next season, the Illini are still in need of a dynamic forward. Holyfield is exactly what the Illini need and it seems as though he’ll be at his most comfortable at Illinois. 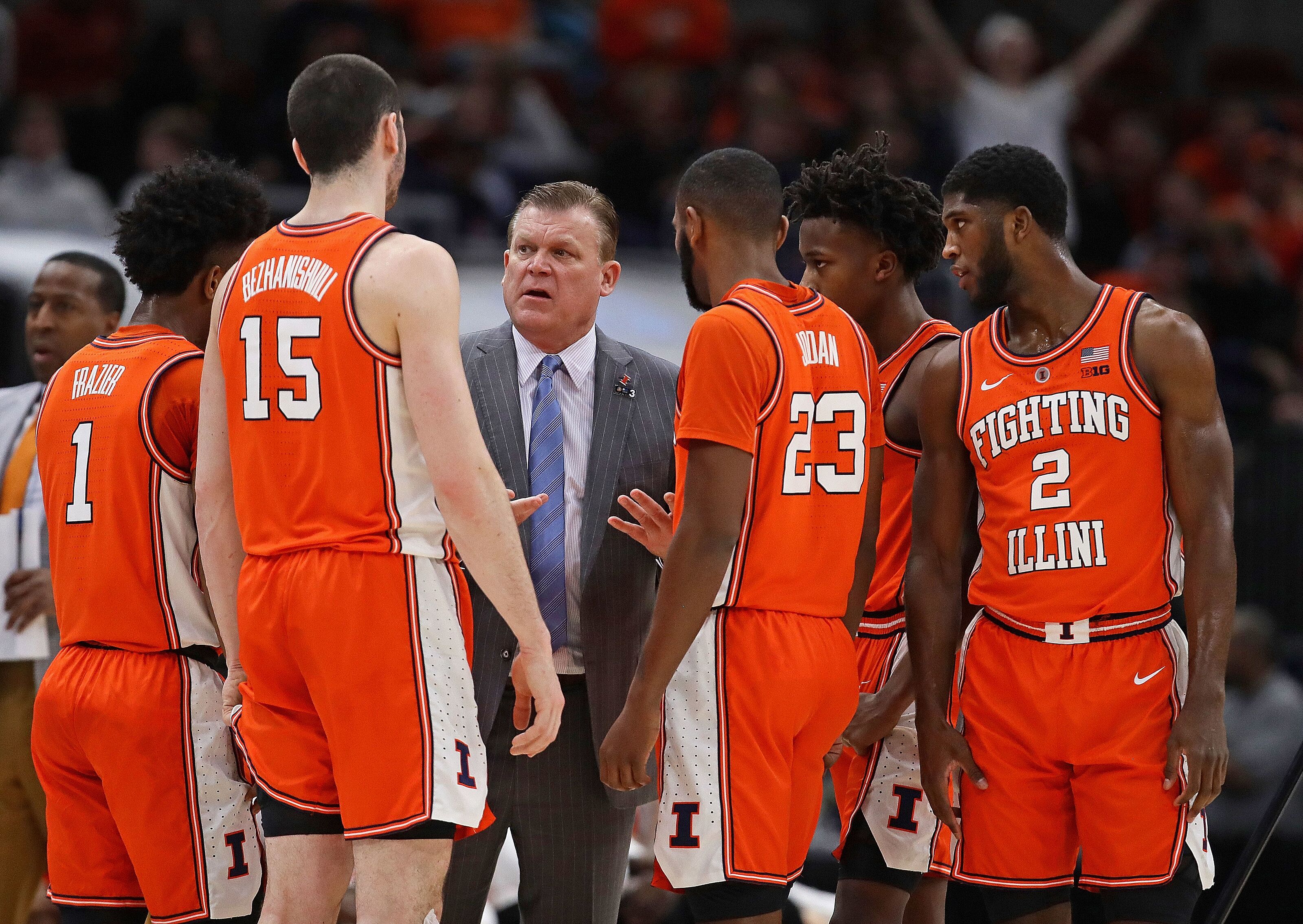 One of the highlights of Holyfield’s visit to Champaign was sophomore Ayo Dosunmu starting a TJ chant at Ubben Practice Arena with a packed house of Illini fans surrounding them. It was clear that Dosunmu wanted to make Holyfield feel at home. Another positive for the Illini is that Holyfield would be playing for his former Head Coach, Brad Underwood, should he decide to come to Illinois. When I spoke to Holyfield about this opportunity, he stated “I don’t think the transition process would be that hard. He’s my former Head Coach. Coach Underwood plays the same offense and defense, for the most part, as he did at Stephan F. Austin.” Holyfield seems to have a great relationship with the Underwoods as he is also very close to one of the current Illini players, Tyler Underwood. I’ve been made aware that these two talk to each other frequently and Tyler has been pushing for Holyfield to come to Illinois. These factors should allow Illinois to be a major player in securing Holyfield’s commitment.

Where Will Holyfield End Up?

It is clear that Holyfield is relishing the opportunity to showcase himself at the national level. Each of his three programs listed will provide him with the opportunity to do that. Holyfield also mentioned that he loved the opportunity of competing in the Big Ten Conference. This would allow him to showcase his talent in arguably the best college basketball conference in the country. And with all the talent that the Fighting Illini are bringing back, Holyfield will probably feel that he has a chance to do something special with the guy that recruited him from the beginning. This is why I believe TJ Holyfield will announce sometime early this week that he has committed to Illinois. Everything makes too much sense and I cannot see him going anywhere else.